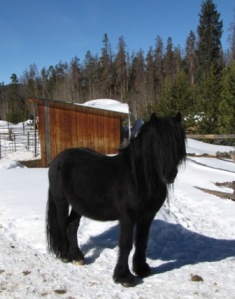 The past few days I’ve been bringing Restar Mountain Shelley III into a private stall for the night.  In the morning I return her to the paddock she shares with my stallion Guards Apollo.  One evening recently my husband helped me with chores, including bringing Shelley up for the night.  He and I walked to the gate together, and Shelley and Apollo put their heads over the fence to greet us.  I went in the paddock to halter Shelley and after handing her leadrope to Don over the fence, I went to feed Apollo in order to distract him from the gate.

Don started talking to Shelley, telling her she was his favorite (he tells that to all of them) and that she was his best girlfriend.  As I fetched hay, it was clear Apollo was not interested in being distracted, and I heard Don talking to Apollo.  It sounded like Apollo was doing his best to communicate that Shelley was his girl, not Don’s.  Apollo then took off at a run up the paddock long enough to allow Don to slip Shelley out the gate.  Then Apollo returned to the gate at high speed, spun around, and let several kicks fly in Don’s direction.  It looked like male rivalry in action.  Don had taken Apollo’s girl away, and Apollo was expressing his displeasure.  It made us both laugh.