A Facility with Fence 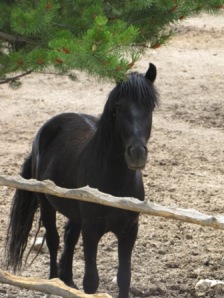 Willowtrail Jonty has a facility with fence

It appears that my dear Fell Pony Jonty has inherited his mother’s facility with fence.  He has definitely inherited her jet-black color and her white markings.  And now I know there is something else his mother has passed on to him.  At least three times in this blog, I have related how Turkey Trot Sand Lily has liberated herself and her paddock-mates because she has known that the electric fence is off.  Three times in the past three weeks, Lily’s son Willowtrail Jonty has greeted me in the morning on the wrong side of his own fence.

The first time, Jonty discovered where a tree had crushed the fence, and he knew that the grass was greener on the other side.  Note that his six paddock mates did not follow him on his adventure.  The second time Jonty was leaning over the wood fence, and fortuitously for him it broke under his weight.  He stepped over the broken fence to get a green breakfast.  Cavaletti will never be a problem for this boy!  Yesterday morning, Jonty had undone my temporary fence repair at the first broken fence spot.  I’ve just come in from executing a permanent repair.

Willowtrail Wild Rose was my constant ‘helper’ while repairing the fence.  Following my belief that training time is all the time, I saw an opportunity I couldn’t resist:  a curious pony wanting my attention.  So I scratched Rose a few times in her favorite places then stood alongside her and threw my leg over her back like I was going to mount from the ground bareback.  (Rose is about 12.3hh, and I have long legs, so this maneuver isn’t as impossible as it sounds.  I love Rose’s size for just this reason!)  I removed my leg because Rose didn’t have any problem with it, then I threw it over again and hugged her around her neck, increasing our contact, still keeping my other foot on the ground for safety.  No problem again.  I repeated the routine on the off-side and called it all a great success.  I look forward to starting formal ridden training; it ought to be a piece of cake!

Jonty’s facility with fence just makes me smile because he looks at me with such innocence when I find him where he shouldn’t be.  Fencing is an unending job with these ponies, so having interactions like I did with Rose makes the job more enjoyable.