No News is Good News? 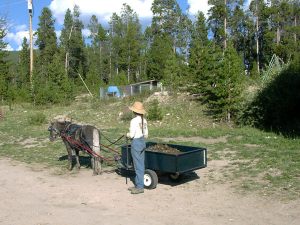 After the twelfth episode (I think) of colic in two years, this week we took Mya the Wonder Pony to Colorado State University’s Veterinary Teaching Hospital for evaluation.  I’ve pulled her through all the other episodes without veterinary intervention, and, sure enough, this time she was better when we pulled into the hospital parking lot.  But I wanted some answers so she wouldn’t go down again.

After two hours of poking and prodding Mya, we had a diagnosis:  a healthy pony.  Not what I wanted to hear!  Not really, of course, but I really was hoping for some answers.  The staff loved her, saying how wonderful and relatively cooperative she was (given that they tubed her, stuck her with needles, shaved part of her abdomen, and palpated every sensitive part of her body.)  There were no dental issues, no blood work issues, no signs of infection, nothing that would suggest why we’re experiencing serial colic.  At the discharge discussion, the doctors were happy and I was in tears.  They felt ‘no news is good news,’ and I didn’t have any assurance that this wouldn’t happen again.

To be fair, the veterinarians and staff were very understanding and compassionate in the face of my tears and frustration.  They feel we’ve ruled out several things, and we’re dealing with a functional rather than structural issue.  I’ve been relatively successful controlling the colics by treating Mya as if she has ulcers.  We may follow up (when I have three days to spare) with an endoscopy to see if they can see anything in her stomach.

Dr. Eileen Hackett, who examined Mya, said that “ponies often suffer colic pain due to small colon impactions.  Small colon impaction typically requires medical treatment depending on severity, and recurrence can be an issue if the impaction is very severe.”  She also said that in our region, in horses, they see an abnormally high amount of large colon dysfunction.   (CSU is known for developing a particular surgical technique to deal with these problems.)  Dr. Hackett said, “Large colon dysfunction can manifest as mild recurrent colic and poor weight gain.”  Since this is a good description of what we’re experiencing, we’re proceeding with Dr. Hackett’s recommendation.

Dr. Hackett’s recommendation is a slight adjustment to Mya’s diet.  Adding a highly palatable feed such as a senior ration/hay replacement will ensure that Mya has regular volumes transiting her large colon.  We are adding a small amount twice a day as a supplement rather than a replacement.  I had already decided to change our hay back to unfertilized grass hay from fertilized grass hay, in case there was an issue there.  A recent article on senior equines in Equus magazine suggests that softer hay is a good idea for older equines. (1)  This new hay seems to be softer.

While getting ‘no news’ about Mya wasn’t the good news I’d hoped for, I did take some solace this morning reading about a study of owners of older equines.  Apparently many owners mistake clinical problems for signs of old age and leave them untreated. (2)  I felt good that Mya’s examination at the hospital revealed that I hadn’t missed some clinical problem requiring treatment, given that Mya is 21 years old.  As a friend reminded me yesterday, Mya is still here because I keep such a close eye on her.  This morning she was her normal demonstrative self when I arrived with her bucket of senior feed and other supplements.  Time will tell if a diet change is the good news I’ve been wanting.

Breeder of Fell Ponies, teamster of work ponies, and author of Feather Notes, Fell Pony News, and A Humbling Experience: My First Few Years with Fell Ponies. Distributor of Dynamite Specialty Products for the health of our planet and the beings I share it with.
View all posts by workponies →
This entry was posted in Natural Health, Work Ponies. Bookmark the permalink.

2 Responses to No News is Good News?