There is a lovely new documentary out from Dreamtime Films called “Hefted.”  If you haven’t watched it and you enjoying learning about fell life, it is definitely worth your time (click here).  The film is about the connection that fell sheep and some fell people have to the land they call home (the word ‘hefted’ is difficult to translate; this is only an approximation.)  Since the producer, Tom Lloyd, is from a family that has bred Fell Ponies for decades, I was curious if he’d ever considered if Fell Ponies are hefted.  The Lloyd family breeds the Hades Hill ponies. 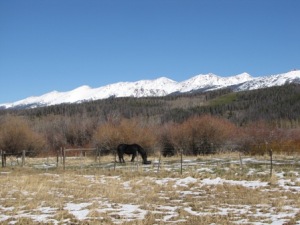 The source of my curiosity about hefted Fell Ponies is my senior mare Sleddale Rose Beauty.  I have more than one photograph of her standing and looking off into the distance as if she’s contemplating being somewhere else.  Beauty was born on the fells and was with the Sleddale herd before being sold at three years old.  I’ve often wondered if she pines for the land of her youth.

I got some interesting insight into Beauty and the term ‘hefted’ yesterday.  I had to take her to the vet because one of her eyes had begun watering.  The vet diagnosed a mild ulcer in her eye, cause unknown, and drops have been prescribed.  It was amazing to watch the vet apply the first drop and see Beauty lick and chew immediately and then whinny loudly.  She apparently liked the treatment!  After I put her back in the trailer, I said to her, “We’re going to have a bonding experience with these drops.”  She licked and chewed again.  This pony continues to amaze me with the depth of her understanding of humans.

On the way home, I needed to stop at the summer pasture to do an errand.  As I opened the trailer, I could tell that Beauty knew where we were.  I unloaded her and led her to a grassy paddock to give her some grazing time while I finished my chore.  Her behavior was noticeably different here from when we were in town at the vet clinic.  There she had very busy feet, she was uninterested in green grass, she held her head high, and she looked all around anxiously and even called out a few times (when we were driving through town, we passed another horse trailer, and she called out then, too.)  At pasture she was noticeably calmer despite being the only pony there, and while she always moves with authority, this time there were no extra steps, just her normal purposeful stride.  I let her loose and first she checked to see if the gate to her favorite pasture was open; when it wasn’t she settled in to nibbling what green she could find.

Tom Lloyd’s answer to my question about Fell Ponies was that they are adaptable.  His family’s herd has been shifted from one fell to another quite successfully.  With ‘a good view and fresh air’ these ponies seem to adjust to change, was his opinion.  I would say that Beauty is hefted; she knows and prefers home ground to unusual surroundings, and yesterday she made it clear that two different locations,  summer pasture and her paddock here, are both where she likes to be.  I realized that I depend on Beauty being ‘heefed’ to manage the herd in my absence.  I know she will lead them to water, to minerals, to shelter when any of these are needed.

One of the people interviewed in the film said, “They want to get to London, to explore London; well that’s the last thing I would want to do.  And if I was coming home by train, when I began to see the outline of the Pennines, your heart lifts.  There’s no doubt about it.  There’s an emotional connection to where you’re heefed…. I think if you live in an urban setting and don’t live among sheep, especially hill sheep, and don’t understand hefting, I think they’ll still be hefted but they don’t know what the word is; perhaps we need to tell them that’s what’s happening to them; they’re hefted, too….”(1)  I moved away from Colorado briefly once; when I returned I had a very strong feeling of being home.  My husband has a similarly strong bond to where we live.  It’s certainly my sense that people can be hefted; perhaps that’s why this film spoke to me so strongly and why it seems to me that Beauty is hefted, too.