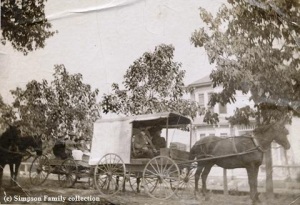 Dan and Kate Glenn and Old Jim about to depart on their trip south in 1902.

In 1902, my great great grandparents took a horse-drawn journey from Ashland, Oregon to Long Beach California.  The trip was over 700 miles and took nearly five weeks.  Along the way, Dan and Kate Glenn easily found hay, feed, water, stables, and fellow travelers with their own horses and wagons.  When they encountered a car, it merited mention in their diaries because it was so out of the ordinary.

Fast forward to today when the opposite is the case.  Cars are common modes of transport, and equines on long distance journeys are seldom encountered.  Hay, feed, water for equines, and stabling would be much more challenging to find whereas, of course, filling stations for autos are ubiquitous.  People today are accustomed to cars and not at all accustomed to horses.

An article in Equus magazine highlighted this last fact.  It discussed a 2013 Connecticut Supreme Court case in which horses were classed as ‘mischievous or vicious” and capable of doing harm by biting.  The particulars involved a man visiting a retail establishment and taking his young son in his arms to the fence to see the horses pastured next door.  He petted one of the horses, and the horse reached out and nipped his son on the cheek, causing permanent injury. (1)

Karen Elizabeth Baril, the author of the article, made several important points:

I was particularly struck by that last statement.  Because I spend a significant part of everyday around my ponies, it’s easy for me to take for granted what I know about them and to forget how few people encounter an equine on a daily basis.  Unlike in my great-great grandparents’ time when everyone was around them nearly daily, now it’s a small minority of the population that encounters an equine at all frequently.

I wrote an article for Rural Heritage magazine about my great-great grandparents’ journey from Oregon to southern California (click here for more information).  Readers of that magazine are likely around equines on a regular basis, so I didn’t do much there to ‘help people learn about horses.’  However, I was able to share that article with members of my family.  I am the only member of my family who is involved with equines, but since the article was about a common ancestor, my family members found the article interesting.  It was much more accessible to them than most of my writing, so it is one thing I have done that ‘helps people learn about horses.’  I’ll keep the importance of that goal more at the top of my mind since reading Baril’s article.

Breeder of Fell Ponies, teamster of work ponies, and author of Feather Notes, Fell Pony News, and A Humbling Experience: My First Few Years with Fell Ponies. Distributor of Dynamite Specialty Products for the health of our planet and the beings I share it with.
View all posts by workponies →
This entry was posted in Inspirations, Sustainable Equestrianism. Bookmark the permalink.

1 Response to Then and Now