Consequences of Breeding Closely in the Fell Pony 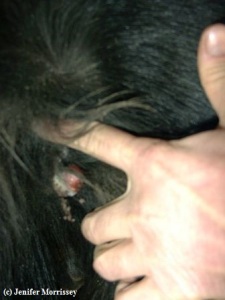 A sarcoid on a Fell Pony

DNA research has found that the Fell Pony’s genetic diversity is healthy relative to other breeds.  Nonetheless I think we have to be careful when breeding closely-related ponies to each other.  I know there are benefits of linebreeding and similar techniques.  However my concern about using care in breeding is based upon my experience with rare breeds and on seeing adverse consequences from breeding closely-related Fell Ponies.

For a decade I bred Silver Appleyard ducks, listed in the Critical category of the Conservation Priority List of The Livestock Conservancy.  I learned during my stewardship that the North American population of this breed had descended entirely from a single pair of ducks that were imported from England.  I bought most of my outside breeding stock from a large breeder.  One year, though, I wanted to bring in different bloodlines, so I bought ducklings from a different smaller rare breeds steward.  The next year when I hatched out their offspring, I lost most of the ducklings at six weeks when they appeared to have heart attacks and die.  I have always attributed it to their parents being too closely related.

I have seen something similar in Fell Ponies.  Foals that fail to thrive have resulted when half brothers and half sisters are bred together.  This sort of cross is often successfully used in linebreeding.  In Fell Ponies I have seen more problems when the common ancestor is female rather than male.

Foals that fail to thrive aren’t the only consequence of breeding closely that I have seen.  The most extreme example I’ve seen is deformed foals that had to be euthanized.  In that case the mare seemed to have a compromised reproductive system.  She was the offspring of a particular stallion/mare combination, and her full sister had sweet itch which, if viewed as an auto-immune disorder, might be considered another consequence of close breeding.  Again in this case the close breeding was on the female side of that particular stallion/mare combination:  the mare and the stallion’s dam were half sisters.

Sarcoids are another problem we see in Fell Ponies. While they appear to be hereditary, in one case I’ve traced them back to a mare who was closely bred.  Her father and her mother’s father were half-brothers.  I suspect her immune system was in some way compromised due to close breeding, and sarcoids were the manifestation.

Another case was labeled a freak accident.  A pony broke its leg while running in a pasture which is of course something that ponies do on a regular basis.  This pony was the result of a stallion/mare cross whose fathers were half-brothers.

I do not of course have proof that these health problems I’ve seen in Fell Ponies are consequences of close breeding or a narrow gene pool.  That they might be though suggests that we as stewards of the breed need to take care when mating closely-related ponies.  As I’ve seen in some cases, the problems don’t necessarily manifest in the first generation but may be visited upon offspring.  The future of the breed as always depends on the current decisions of its stewards.

More information like this is available in the book Fell Ponies:  Observations on the Breed, the Breed Standard, and Breeding, available internationally by clicking here.

Breeder of Fell Ponies, teamster of work ponies, and author of Feather Notes, Fell Pony News, and A Humbling Experience: My First Few Years with Fell Ponies. Distributor of Dynamite Specialty Products for the health of our planet and the beings I share it with.
View all posts by workponies →
This entry was posted in Fell Ponies, Rare Breeds. Bookmark the permalink.
%d bloggers like this: