An End-of-Life Lesson from Beauty

A friend once told me that the years in our fifties are the best time of life because you have enough body left and enough wisdom developed to do what’s important to you.  It also seems like it’s when we are faced with really difficult tasks with the elders in our lives.  I know my friend mentioned this fact in passing, but she definitely didn’t prepare me for the roller coaster ride that it is.  Sleddale Rose Beauty, my recently passed Fell Pony mare, had wisdom to share on this topic at the end of her own life, just as she did on so many other topics during my life with her.

The most intense roller coaster ride regarding my elders has been with my aging father.  My sister and brother have born the bulk of the caretaking responsibilities.  I help where I can (Dad seems to enjoy postcards of my ponies!), and I have not been immune to the emotions that result.  It is hard for all of us to watch this consummate gentleman and professional be taken from us by dementia.  What has made it harder is that my parents were very private about their affairs and felt they would manage their old age themselves.  Their plans, though, didn’t take into account that their minds would go before their bodies, so their ability to make appropriate decisions failed before their needs for such decisions did.  As their children, as a result, we’ve been left with some difficult decisions.  Anyone about my age undoubtedly knows what I mean, for I know we are not alone.

I read about a contrasting approach to end of life planning recently that, had I not experienced with my parents what I have, I might not have appreciated to the same degree.   A woman was diagnosed with early stages of Alzheimer’s.  Rather than let the disease take her brain and impose difficult caretaking of her body on her loved ones, she planned her own death by suicide.  She surrounded herself by loving friends and family and peacefully departed in her own home.  It was an ending with dignity. Her daughter said, “It was just so obvious that this is about as good as it gets for a human exit.”  (1)

As anyone knows who has followed the stories of Willowtrail Fell Ponies, Beauty was my first of the breed.  After her first foal was born, I went through a difficult personal period where I put all my Fells up for sale.  Beauty went off to a new owner.  However, Beauty obviously didn’t like this turn of events, and she did everything she could to influence the human world so that she could return to my care.  She was gone less than three months.  As she neared retirement, I had more than one offer to give her a retirement home, but Beauty made it clear that she wanted to live out her days with me.  At the end of her life, it became fully clear why she had made that choice.

In the spring for the past several years, I’ve begun writing Beauty’s obituary because of the toll our tough winters took on her.  Each time, though, Beauty bounced back.  This spring, though, despite a relatively mild winter, there were numerous signs that Beauty’s time was coming to an end.  Some health problems appeared, all of which could have been treated individually with some success, but collectively it was clear to me that Beauty’s body was starting to fail.  Her spirit was still strong, and this is the way I wanted to remember this mare.  I didn’t feel I had a good road map for this decision-making process, but to give Beauty the dignified ending I thought she deserved, I felt going out with her spirit still strong was the right thing to do, similar to the choice made by the woman who exited by suicide before dementia took her spirit.  Beauty accepted my decisions with grace, and I am glad that her last breath was taken sniffing my hand.

I don’t know if the tears will ever stop falling when I think back on Beauty’s exit from my life.  I am, though, fairly certain that I understand her lesson about what end of life planning needs to look like.  To have an exit with dignity, end-of-life planning needs to take the failing of mind as well as body into account.  Dementia to me is the worst way to exit; watching my father’s journey is made even harder knowing that I carry his genetics so I might be witnessing my future.  But the dementia aspect isn’t the key part of Beauty’s end-of-life lesson.

What I also have as a legacy from my parents is a strong degree of self-reliance.  It is that self-reliance that caused my parents to be very private about their affairs.  In the end I don’t think it served them well.  Beauty was in her own way also self-reliant, and it is perhaps because of this that her end-of-life lesson was so clear because it was a stark contrast to her general approach to life.   Beauty set aside her self-reliant streak and entrusted me with the responsibility for her end-of-life planning.  By doing so, she got the exit with dignity that she seemed to want.

Exiting with dignity may not be everyone’s goal.  And even if it is, what an exit with dignity looks like will be as individual as each of us is.  What Beauty taught me, in contrast to my parents’ approach, is that involving a trusted ally may be necessary.  For a self-reliant sort like me, this is tough medicine to swallow.  Fortunately, Beauty was as gentle in her instruction in this lesson as she was in all the others she blessed me with.  I was fortunate to spend so many years with her. 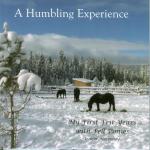 If you find stories like this one of interest, you’ll also find of interest the books A Humbling Experience and What an Honor, available internationally by clicking here.

Breeder of Fell Ponies, teamster of work ponies, and author of Feather Notes, Fell Pony News, and A Humbling Experience: My First Few Years with Fell Ponies. Distributor of Dynamite Specialty Products for the health of our planet and the beings I share it with.
View all posts by workponies →
This entry was posted in Fell Ponies, Inspirations, Partnered Pony (TM). Bookmark the permalink.
%d bloggers like this: