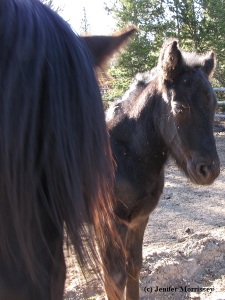 It was just before sunrise, and I’d fed the mare in the foaling shed and the ponies in the mare paddock.  I changed my clothes and set up my yoga mat.  It faces a window looking out on a forest where I often graze mares and foals, with a large spruce tree obscuring most of the view.  A few minutes into my yoga routine, I saw movement through the spruce tree.  I was able to pick out a summer-black baby switching its tail insistently against the morning’s insects.  I smiled, enjoying the sight.

I took another deep breath and settled back into my yoga routine.  Then I realized something wasn’t quite right.  I don’t have any summer black babies right now.  I had just fed my only foal, and it is a jet black, and it is in the mare paddock.  It was clear that the heat exhaustion I’d been suffering had impacted my ability to think clearly.

Then I began to smile again, this time with amusement.  I hadn’t been hallucinating; there had been a summer black baby walking through the woods.  It’s just that it wasn’t a pony, though it has similar hock action.  The baby I’d seen switching its tail just like my jet black foal was a very young moose!  The day before I’d seen two cow moose outside the mare paddock, and I wondered where their babies were.  This time I’d seen the baby without the mama.

I’m under doctor’s orders to do yoga daily.  Even our chiropractor endorses the idea.  He told us a story about an 85 year old client who looked thirty years younger.  When he asked how she looked so young, she said daily yoga and weekly chiropractic then did a hand stand against the wall!   I’m pretty sure being distracted by a moose doesn’t abide by yoga practice rules, but surely the smile that lit my face counts for almost as much as proper yoga!

If you like stories like this, you’ll find many more in the books What an Honor and The Partnered Pony, available internationally by clicking on the book covers.

Breeder of Fell Ponies, teamster of work ponies, and author of Feather Notes, Fell Pony News, and A Humbling Experience: My First Few Years with Fell Ponies. Distributor of Dynamite Specialty Products for the health of our planet and the beings I share it with.
View all posts by workponies →
This entry was posted in Fell Ponies, Partnered Pony (TM). Bookmark the permalink.
%d bloggers like this: